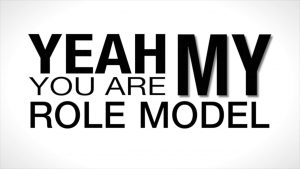 A role model is defined as ‘a person looked to by others as an example in a particular role.’ Research has shown that a member of the family is for most people their most important role model in life. The second most important role model however changes in the course of time: for people between 18 and 30 it is a teacher or a coach, for people over 30 it is a business leader. This business leader is not necessarily a top manager but more often the direct supervisor, thus the person to whom someone reports directly and works with daily. This means that every manager at every organizational level has to be a good role model because they have the most influence on employees’ motivation, loyalty, commitment and performance. Employees listen to what their managers do and not to what they say, so managers have to lead by doing and thus give the right behavioral example.

HPO managers set this example by always being committed, engaged, enthusiastic, positive. They act boldly in times of crisis while keeping a perspective, do not easily give up, put in the hard work themselves, and are always visible as a leader during trying times. HPO managers are not arrogant and in fact solicit for strong opinions and counteractions so their own ideas are challenged in a way that makes them better. They try hard to be a role model, not only for employees and colleagues, but also for partners and clients. In this way, the HPO manager creates a value chain with parties who trust each other completely.

The catering manager and behaving as a role model

As mentioned before, the catering manager has years of experience in the industry, among others as a cook. Because of this he has a lot of knowledge of food products, preparation techniques, and presenting the food attractively. Employees feel challenged by the catering manager to become as knowledgeable as he is. In addition, the catering manager shows through his actions that quality is number one to him. Not just quality of the products served by the restaurant but also quality of the way customers are treated. Instead of bombarding employees with his opinions on quality, he shows them through behavior what is important.

At Microsoft our top managers are really seen as role models. Using interaction with our CEO Steve Ballmer as an example, when you give him a presentation he flips through the slides and after two minutes he has internalized it and launches into discussion. Open, direct, and respectful. He expects feedback in the same manner, and is looking for healthy debate and dissonance. I also think he is very approachable. For example, if I need a one-on-one meeting with Steve because something is troubling me, I will be able to quickly get half an hour with him. And that is not because I’m an executive at the company, we simply have open and direct communication channels. Steve sets a good example, and one I am trying to follow. If people approach me I try to be as open and welcoming as Steve is. This openness is a core value of Microsoft.

IDEAS TO GET STARTED TO BECOME A ROLE MODEL

Quality of management has to come from the top. That is quite obvious naturally, but I mean that the longevity of the chief executive officer and the focus of that individual at the top is absolutely critical. And if that individual is successful in doing what he or she is setting out to do, it will spread far and deep, down to the front lines. Then you have your army out there. If it is living and breathing you have created a culture. I think the culture we have here really is what differentiates us and what keeps people here. Our chief executive officer, Ray Davis, developed a vision for the company. But in the fourteen years he has worked here, it has gone beyond him. And that is good because the culture is now stronger than ever and has the ability to withstand change, even change in leadership.

For more information about the HPO Framework, HPO Diagnosis, our lecturers, HPO Experts, workshops and Master Classes, please contact us (vink@hpocenter.com or T. +31 (0) 35 – 603 70 07).