Chief executive officers can place their organizations, and themselves, in severe difficulties by promising the stock market that their companies will grow 15 percent in turnover a year. In itself it is not so surprising that chief executive officers make these forecasts time after time. After all, a yearly growth of 15 percent means profits can double every five years, which will make these chief executive officers the favorite of analysts and shareholders. They will be ranked among the most-admired business leaders, a temptation only few are able to resist. Unfortunately, the reality is rather more complex. Research shows that a growth rate of 15 percent is unattainable for most companies and can therefore be considered an illusion. This was the outcome of a study which calculated the average growth rate in earnings per share for a cross section of Fortune 500 companies, over the last four decades, as depicted in the below figure.

The results were astonishing: only a maximum of five companies (of the 126 examined over the period 1980-1999) obtained an average growth rate of 15 percent or more. At the same time, there were 33 companies with a negative growth rate. Companies which repeatedly fail to realize forecasted growth are likely to practice roller coaster management (see figure below). 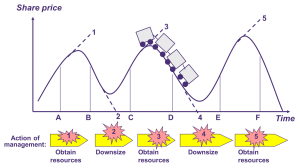 Once a company has announced its growth expectations, management has to obtain and employ the resources needed to process the expected volume of trade (situation 1 in the figure above). The stock market rewards this vigor of management with a rising share price. However, when turnover growth and profits lag behind expectations, the stock market responds by selling of shares: the share price goes down. On top of this, the organization now has a resource surplus which it has to get rid of: dismissals are the result (situation 2). In the next stage, new management makes new promises. Again, the stock market rewards this vigor and the share price rises (situation 3), and so on and on. Needless to say, this kind of management creates havoc in an organization. The urge to grow fast does not necessarily produce a good strategy. A study shows that of the 100 largest American companies at the beginning of the 20th century, only 16 made it to the end of the century. It turned out that company size was not indicative for the chance of survival of a company. Another study shows that fast growth does not necessarily yield higher profits or shareholder value. On the contrary, fast growth can in fact have an opposite effect. When the results of almost 3,000 organizations in the period 1993 to 1998 were examined, it turned out that companies with a moderate but steady growth of turnover and assets had the highest return on investment and economic value added (EVA)! A one-sided focus on fast growth can make a chief executive officer lose sight of a company’s main goal: continuity. In addition to achieving a certain margin and return for all stakeholders, a chief executive officer has to guarantee the survival of the company. It is therefore important that management changes its strategic orientation from ‘growth and shareholder value now, continuity tomorrow’ to ‘profitable and sustainable growth today’.